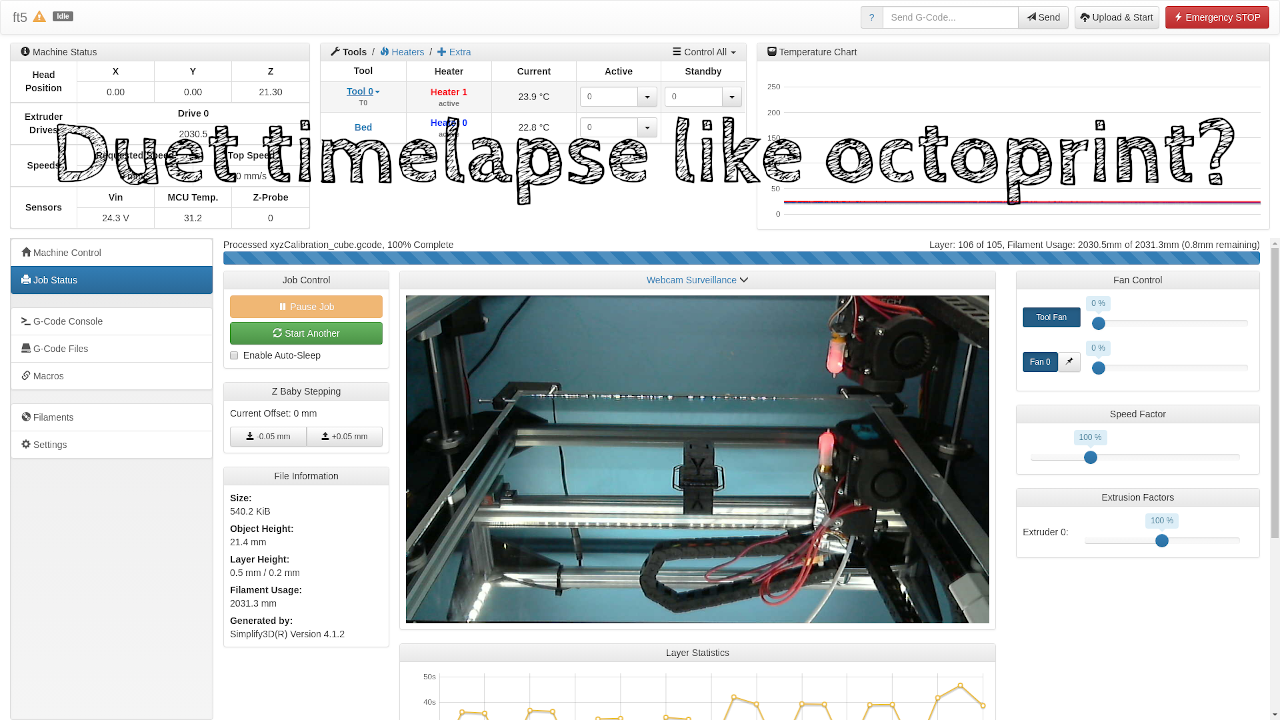 BrianSnelgrove - November 28, 2020
Posted Under: Maker
A NEW VERSION IS HERE!!! One of the really nice features of OctoPrint is the ability to easily get time-lapse videos of the print. Duet makes an awesome product but by moving away from OctoPrint you lose the built-in ability to create a time-lapse video - this is how I overcame that!
Unless otherwise noted, all directions are for Debian based systems. Most steps will work for other distributions but some commands may need modifications.

A few people have provided some feedback on this version. I wanted to play around with python and there were a few things I didn't like about this version of the so... Why not completely rebuild it? The updated guide is available here: https://www.dr-b.io/post/Duet-3D-Printer-TimeLapse-V2

I will keep an eye on comments/feedback from this version but please try the new version - I think it will be easier to implement and more reliable than this version.

I have been playing with 3D printers for a few years now. The ability to design something and quickly (relatively speaking) print out a functional prototype is very intriguing. My first couple of printers were tethered to a computer of some sort with a USB cable, and I eventually started using OctoPrint installed on a Raspberry Pi. OctoPrint provided a beautiful web GUI to control the printer and could create time-lapse videos. I eventually upgraded my last printer to a Duet WiFi controller. As lovely as it is and as much as I love it (there are a few drawbacks, but I will not get into them here), I really missed the ability to create those time-lapse videos easily.

I did a little research and figured out that the Duet webserver can be sent some specific queries to get the printer status (file name of the print job, x/y/z coordinates of the print head, etc.) and I thought I could use that as a starting point for my own time-lapse creation. The short video below is created by this process with a Raspberry Pi, both hosting the mjpeg stream that is used to grab the images and the processes to take the completed still images into a time-lapse video. While this video is just a small calibration cube, it does show the process in action. Larger prints are much more exciting to watch in a timelapse, but this gets the point across.

The solution to this particular issue only took me a bit of time. Since I had already used OctoPrint (and if you still have your printer tethered with a USB cable, I HIGHLY recommend OctoPrint) I had a webcam and Raspberry Pi. If you don't already have those, you can get them both from Amazon for less than $100: Raspberry Pi and  Logitech Webcam (this is not the same webcam I am using but it *should* work). The Pi in this link is an older Pi 3, the newer Pi 4 would be faster creating the video, but I have never had any issues with the older Pi 3 I am using.

I uploaded the script to GitHub, if you are comfortable pulling a repo you can get it here: https://github.com/dr-b-io/dmc but if you want a little help walking through the process just follow along!

These directions DO NOT step you through setting up the video source. You can use any mjpeg stream source for the still images that will be captured by this process. I personally am using mjpg_streamer, and there are many guides on the interwebs that explain how to get it up and running. I honestly do not remember what guide I used, but the following seems to be recent and is pretty straight forward: https://github.com/cncjs/cncjs/wiki/Setup-Guide:-Raspberry-Pi-%7C-MJPEG-Streamer-Install-&-Setup-&-FFMpeg-Recording. You only really need the first block to get mjpg_streamer running but the autostart script may be useful, I have not tried it. You do not HAVE to use a Pi and Webcam as the image source - you can use ANY mjpeg source. I have tested with a cheap IP based reolink security camera and it worked without complaints. YMMV.

With that out of the way, let's get started! Open a terminal and make sure you have the pre-requisites installed:

You should now have a folder called dmc in your home directory, move into it, and rename a configuration file:

Two changes need to be made in the configuration file:

Find these two lines and update them for your system:
PRINTER=URL_TO_DUET - this should be updated to the name or IP address of your Duet (http://printer.local as an example)
MJPEG_SOURCE - this should be the full URL to your mjpeg source (http://192.168.1.10:8080/?action=snapshot as an example)
Save and close the file (CTRL+X -> Y -> Enter)

Now you are ready to test the process!

You should see a few lines of output where the process starts, then every few seconds you should see another line where the process checks the z-height of the printer and the printer status. This would be a good time to start a small print and let the process grab some snapshots (one at each z-height) and create the video. You may see some complaints when ffmpeg is running, but I have not had any issues with the video that is output. When the process is done, it will remove all of the jpeg still images that were created, and you will have a video named after the file you just printed in the snapshots directory that was just created.

Please note this comment from one of our users. We have not been able to replicate this issue but it should be kept in mind: This works great, however with the latest Duet 2 Wifi and latest RepRap Firmware, The DuetMonitorCapture.shl script needs to be changed up a bit. When it pulls the $File value, it also pulls the folder path from the Duet. looks something like this: "snapshots/0:/duet/FileName/ To resolve this I removed the $File from the file paths of the save locations. When we are able to replicate the issue we will update the git repository with a resolution.

Do I have to remember to start this process at the beginning of each print?

Absolutely not! You can run the following command whenever you boot/reboot your system (Raspberry Pi in my case), or you can add it to a startup script. Nohup tells the system to keep the process running when the terminal closes (No Hang Up) and the ampersand tells the process to return to a prompt immediately.

The process will monitor the Duet and start taking still images whenever it sees the status change to printing. When the printer goes back to idle it will compile the stills into a video and save it with the prints file name. If you print the same item multiple times, it will try to overwrite the video each time - if you want to keep them, you should copy them before you start the next print.

When you get done with a print, copy the compiled video and post it wherever you want. Simple as that!

Items used in this guide:

Disclaimer: some links are for affilliate programs and DR-B.io may recieve a comission from them. No products or links are displayed soley for the purpose of commission. Any products or links posted are based on prior use and recommendation of the products at the time of posting.

Discussion - all postings are moderated

Brian Snelgrove - November 23, 2020
That is progress! This appears to be an issue with ffmpeg during the conversion of snapshots to video. It is possible that the issue is related to the $FILE variable since TC Miller reported a similar issue. Since the script is creating the snapshots my suggestion would be to manually run the command that compiles the snapshots into the video. When you get the command to run successfully update the script to mirror the manual command.

Brian Snelgrove - November 19, 2020
Andrea, also check the URL for the Duet board to make sure you get a JSON response from the Duet. The full URL for the Duet will be the name/IP address you have entered in DuetMonitorCaputre.config with "/rr_status?type=2" (without the quotes) appended to the end. In my case, my Duet has a network name of ft5 and the JSON response can be checked with "http://ft5/rr_status?type=2" (again, without the quotes).

Brian Snelgrove - November 19, 2020
Andrea, please check the MJPEG_SOURCE variable in DuetMonitorCaputre.config and verify you get a still image from a web browser. There are two files created when the script launches (response.txt and header.txt), but both should be removed almost immediately. It sounds like the URL entered for MJPEG_SOURCE is capturing a video stream instead of a single snapshot. That could explain why the file is growing so quickly and not automatically removed by the script. I hope this helps!

Andrea Agostini - November 18, 2020
I undesrtood that the issue is that the JSON it gets is non well formatted for him or it doesn't get a JSON at all...any idea?

Andrea Agostini - November 17, 2020
If it could help I see a file named response.txt in \dmc wich is growing in dimension very quickly (almost 2GB after 2 minutes of print)

Andrea - November 17, 2020
Hi, I've installed everything but ffmpeg and mjpeg-streamer because I had previously installed them. when I start the script in putty appears the lines: pi@raspberrypi:~/dmc $ . DuetMonitorCapture.shl /home/pi/dmc is the current working directory. Configuration file found, sourcing contents During the first print it always appeared text lines who tells that that was an error with z ' ' (unfortunately I haven't copied them)...now at each print it appears no other lines and no snapshot is taken....what am I missing? Thanks Andrea

Brian Snelgrove - September 16, 2020
Thank you, TC. I do not have the latest RepRep firmware installed on my printer. I may try to update it so I can replicate this issue and fix the script. In the meantime, I am updating the article to make a note of this potential problem.

TC Miller - September 15, 2020
This works great, however with the latest Duet 2 Wifi and latest RepRap Firmware, The DuetMonitorCapture.shl script needs to be changed up a bit. When it pulls the $File value, it also pulls the folder path from the Duet. looks something like this: "snapshots/0:/duet/FileName/ To resolve this I removed the $File from the file paths of the save locations.